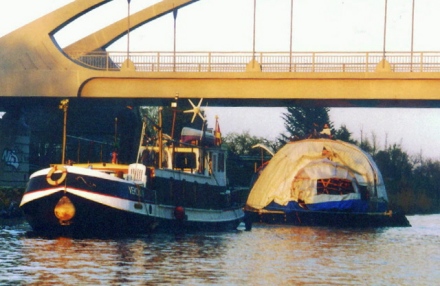 In summer 2002, Joy and a rotating crew went on a treasure hunt on waterways for a „positive future“. The Tour21 was dedicated to the Agenda21 declaration from Rio1992 and was set to evaluate on its voyage, what had been achieved so far towards a sustainable society. Under the patronage of the german environment minister Jürgen Trittin, the Tour21 led from Hanover to the capital Berlin, collecting messages in the bottle on the way and treasure-mapping positive content of the towns and regions on the way. 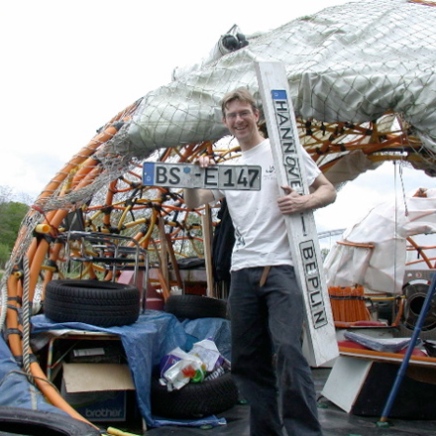 Only 10 days before setting sail, the 70m2 recycling-raft was burnt down in the harbour, to stop the Tour21. This assault never was clarified by the water police (only we know, who did or paid for it…) and Joy was even suspected of having destroyed it by himself.
Finally, this disaster turned out to become the initial kick-off for the project, as many people and groups came for immediate help to make this dream true and let the Tour21 begin.

With the vessel „Vekoma 9“ as flagship, the trip started on time and fulfilled its mission in 15 harbours. After the 6 week reasure-hunt, Joy handed over thousands of „messages in a bottle“ to the environmental minister to carry them to the Rio+10 conference in Johannesburg.

More information on the Tour21:
> link

launch of our floating island25. Januar 2014
Join the ongoing cocreation of a sustainable, floating habitat.